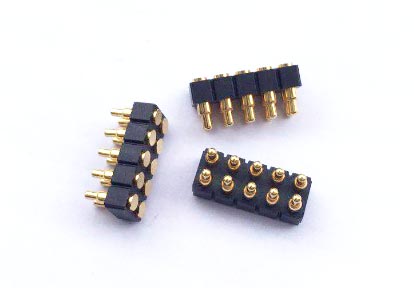 The basic performance of conductive Pogo pin connector can be divided into three categories: mechanical, electrical and environmental performance.Another important mechanical property is the mechanical life of the connector.Mechanical Life is actually a durability indicator, they are referred to as mechanical operation in NATIONAL standard GB5095.It takes one insert and one pull out as a cycle, and it is based on whether the connector can normally complete its connecting function (such as the contact resistance value) after the specified insert and pull out cycle.
1.Mechanical property As far as connection function is concerned, plug and pull force is an important mechanical property.Plug and pull force is divided into insertion force and pull out force (pull out force is also called separation force), the two requirements are different.In the relevant standards, the maximum insertion force and the minimum separation force are stipulated, which indicates that, from the perspective of use, the insertion force should be small (hence the structure of low insertion force LIF and no insertion force ZIF), while the separation force if too small will affect the reliability of contact.
2.The plug and pull force and mechanical life of the conductive needle connector are related to the structure of the contact part (positive pressure), the quality of the coating on the contact part (sliding friction coefficient) and the dimension accuracy of the contact part arrangement (alignment).
2.Electrical Properties The main electrical properties of field connectors include contact resistance, insulation resistance and electrical strength.
(1) High quality conductive connectors should have low and stable contact resistance.The contact resistance of the field conductive needle connector varies from a few milliohms to tens of milliohms.
(2) The insulation resistance measures the insulation performance between the contact parts of the electric charging pin connector and between the contact parts and the housing. Its order of magnitude varies from hundreds of megom to thousands of megom.
(3) The electrical strength, or voltage and dielectric resistance, is the ability to withstand the rated test voltage between the contact parts of the charging external needle connector or between the contact parts and the housing.
Other electrical properties.
Electromagnetic interference leakage attenuation is used to evaluate the electromagnetic interference shielding effect of the connector, which is generally tested in the range of 100MHz~10GHz.
For rf coaxial pin connector, there are also characteristic impedance, insertion loss, reflection coefficient, voltage standing wave ratio (VSWR) and other electrical indicators.Due to the development of digital technology, in order to connect and transmit high speed digital pulse signal, a kind of new type of pogo pin connector is high-speed signal conduction pin connector, accordingly, in terms of electrical performance, in addition to the characteristic impedance, also appeared some new electrical indicators, such as crosstalk (crosstalk), transmission delay (delay) and delay skew (), etc.
3.Environmental performance Common environmental performance includes temperature resistance, humidity resistance, salt spray resistance, vibration and impact resistance, etc.
At present, the highest working temperature of charging pin connector is 200℃ (except for a few special high temperature connectors), the lowest temperature is -65℃.When conducting needle connector works, the current generates heat at the contact point, resulting in the temperature rise. Therefore, it is generally considered that the operating temperature should be equal to the sum of the ambient temperature and the temperature rise at the contact point.In some specifications, the maximum allowable temperature rise of the connector at the rated operating current is specified.
(2) The invasion of moisture will affect the insulation performance of connection H, and corrode metal parts.Constant humidity and heat test conditions are 90%~95% relative humidity (up to 98% according to product specifications), temperature +125±45℃, and test time is 96 hours at least according to product specifications.The alternating humidity and heat test is more rigorous.
(3) When salt mist resistant charging pin connector works in an environment containing moisture and salt, its metal structure, contact surface treatment layer may produce electrochemical corrosion, affecting the physical and electrical properties of charging pin connector.In order to evaluate the resistance of electrical connectors to this environment, salt spray tests are prescribed.
The charging pin connector is suspended in a temperature-controlled test chamber and ejected with compressed air at a specified concentration of sodium chloride solution to form a salt mist atmosphere, with an exposure time specified by the product specification of at least 48 hours.
(4) Vibration and impact resistance vibration and impact is an important performance of the electric charging pin connector, in special application environment such as aviation and aerospace, railway and road transport is particularly important, it is to test the mechanical structure of the electric charging pin connector robustness and electrical contact reliability of the important index.The relevant test methods are clearly specified.Peak acceleration, duration, impulse waveform, and time for interruption of electrical continuity shall be specified in the impact test.
(5) Other environmental performance according to the use requirements, the other environmental performance of the electric charging needle connector is sealability (air leakage, liquid pressure), liquid impregnation (resistance to specific liquid vice ability), low pressure and so on.

If you need to know more details about pogo pin.
Please contact Cnomax Pogo Pin Factory: [email protected]
The company's business target is to be 'practical and innovative and constantly enterprising'. And our tenet is 'Supreme Quality and Excellent Service'.
All products of the company production technology and raw materials are in accordance with the eu ROHS/HF(II 2015/863/EU) environmental standards, and successively passed the ISO9001, ISO14001 and TS16949 system certification!

No previous NEXT：How to choose the right Pogo Pin connector?